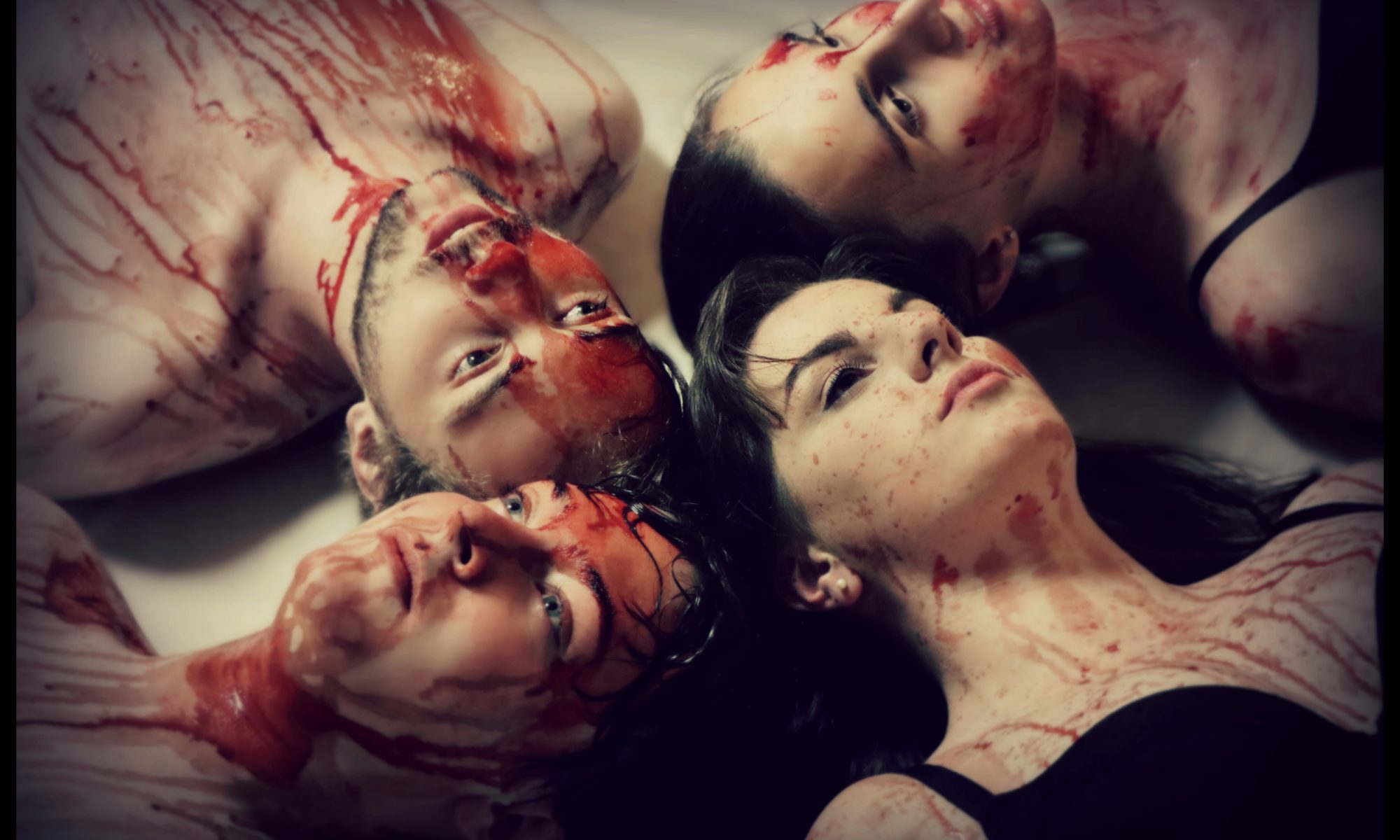 BEARFOOT THEATRE PRESENTS:
I HOPE IT’S NOT RAINING IN LONDON…
ON TOUR!

“Two people, trapped in a room. One is almost finished but the other is not yet ready. The other will be ready, but just not yet.”

In June/July of 2019, a team of six young artists toured from Newcastle to The Central Coast, Sydney and Melbourne. They performed sixteen times at six different venues over the span of four weeks.

I Hope it’s Not Raining in London is a contemporary, hybrid-experimental theatre piece which explores our perceived realities and the effects of trauma.

Young emerging artist, Nicholas Thoroughgood, has written a sophisticated short play, which places two strangers together in a mysterious room. Neither of them has knowledge of where they are currently existing and how they got there- and the newest to arrive has no memories whatsoever. Small boxes appear sporadically- containing objects which trigger memories for them both and gradually their significant life stories are remembered and painfully explored.

The script has since been developed and two of the performers recast. Although all four actors appear in every performance, they alternate roles- taking in turn to play the leading characters. There are four possible combinations to see with a unique experience each time!

I Hope it’s Not Raining in London was performed at three Melbourne venues:

Cube 37- Frankston Arts Centre: A contemporary venue which provides an intimate atmosphere for both artist and audience.

Burrinja: Burrinja is a vibrant community cultural centre with a clear, creative and community-based vision for the region: Building Community through Arts.

PLAYWRIGHT & THE OTHER: Nicholas Thoroughgood

Nicholas started theatre in 2008 playing a frog in Snugglepot and Cuddlepie with Young People’s Theatre Newcastle (YPT); with whom he’s had most of his theatrical training. After this first show he hasn’t stopped, playing various ensemble roles with YPT before gaining his first lead role in his primary school’s production of Seussical the Musical Jr. playing Jojo (Hunter School of the Performing Arts, 2010). After this he successfully auditioned for the role of Michael Banks in Disney’s Mary Poppins, while it was playing in the Capitol Theatre in Sydney, 2011. On return to Newcastle he’s played many roles from Oliver in Oliver the Musical (Metropolitan Players, 2012), Archie in 13 the Musical (National Theatre Company, 2013), Leaf Coneybear in the 25th Annual Putnam County Spelling Bee (YPT, 2016), Arty in Lost in Yonkers (Newcastle Theatre Company, 2014) to Posner in the History Boys (Lindsay Street Players, 2016). He has taken both Tap and Movement technique classes (Renee Perry’s School of Dance) for most of his life as well as Vocal lessons (Miss Kim’s School of Voice).

Nicholas has received multiple awards in the industry including two City of Newcastle Drama Association – CONDAs awards for ‘Excellence by a Male Actor Under 18’ for his roles in the History Boys and Lost in Yonkers. He has also been awarded two awards from the Sharp Short Theatre competition (Riverside Theatre) for Best Actor (2015) for his role in ‘the Librarian’ and then Best Director (2016) for his work on ‘Silence’. He then went on to make his directorial debut with the Lindsay Street Players production of the Crucible (2017) followed shortly by his second Directorial stint in Alice in Wonderland Jr at Young People’s Theatre (2018). Nicholas has also fostered an interest in writing, having his first full play ‘I Hope it’s Not Raining in London’ being staged by Bearfoot Theatre mid 2018. Nicholas is currently studying acting at 16th Street Actors Studio in Melbourne in their full-time program.

Riley entered the industry in 2005, attending regular drama lessons at Young People’s Theatre and singing lessons at Pantseat Performing Arts. They attended the Hunter School of Performing Arts where they studied subjects including Drama, Music and Entertainment Industry Theatre. After graduating, they completed a Diploma of Arts (Acting) from the Regional Institute of Performing Arts and a Diploma of Music Theatre from WEA Hunter Academy of Creative Arts. They have appeared in many local Newcastle productions, including House on Fire (Tantrum Youth Arts),Les Miserables (HSPA), 13 the Musical (The National Theatre Company), Joseph and the Amazing Technicolor Dreamcoat (YPT), One Good Thing (Eclectic) and Avenue Q (WEA). Riley has been employed at Hunter Theatre (Tech Crew/FOH), and at Waterside Music (Drama/Singing Teacher) and they currently work as a drama tutor at Young People’s Theatre Newcastle. Riley also works as a photographer and is the advertising manager at Bearfoot. This is Riley’s first time managing a touring production.

Since the inception of Bearfoot Theatre in 2017, Tyler has taken on the roles of production assistant and sound operator for ‘Do Your Parents Know You’re Straight?’, ‘Take Me To Neverland’, ‘I Hope it’s Not Raining in London’ and ‘Hermit Crabs and Meteors’ and worked as lighting operator on Newcastle Theatre Company‘s ‘Inherit The Wind’. His writing experience outside ‘Hermit Crabs and Meteors’ includes his short play, ‘Microwave’ in Tantrum Youth Arts 10-minute play festival ‘Hissyfest’. He is also an emerging screenwriter and as part of his communications degree at The University of Newcastle, Australia, majoring in media production, he has made three short films.

Cassie is a transgender actress and director, and is Vice-President and Co-Founder of Bearfoot Theatre. She is an active member of the Newcastle Theatre community and has been nominated for City of Newcastle Drama Association – CONDAs awards for both her acting and directing skills.

She began acting at Young People’s Theatre Newcastle in 2007. Since then, she completed her Diploma of Musical Theatre with WEA Hunter Academy of Creative Arts in 2017 and is currently undertaking a Bachelor of Arts majoring in Creative and Performing Arts at Newcastle University. She has gone on to perform in numerous productions throughout Newcastle, including leading roles in The History Boys (YPT), Thoroughly Modern Millie (HSPA) and RENT (Pantseat Productions)

Having been with Bearfoot since the beginning, Cassie worked as a director on their first two productions, Do Your Parents Know You’re Straight, and, Take Me To Neverland, as well as performing in the 2018 season of, I Hope it’s not Raining in London. In October this year, Cassie will debut as a playwright with her first full-length play, Playing Face.

Cassie is so honoured and excited to have the opportunity to come back to I Hope It’s Not Raining in London for its national tour, and can’t wait to bring this beautiful, complex show to a whole new audience.

Daniel is a director, actor and stage manager. He completed a Bachelor of Performance: Acting in 2014 at the University of Wollongong.

THE OTHER: Zoe Walker

Zoe is an award winning actress, singer and dancer well known in Newcastle’s youth theatre scene. She has been involved with many local companies, including Hunter Drama, The Very Popular Theatre Company, High Street Productions and Bearfoot Theatre over many years of shows and development opportunities.

Currently completing her HSC at Hunter School of the Performing Arts, Zoe is a talented musician – performing in the Catholic School’s ASPIRE program (2013, 2016,2017) and Department of Education’s Star Struck (2018,2019). She began her theatrical training at Hunter Drama in 2008 and has performed in a multitude of shows, including The Little Mermaid (2014) Shrek JR (2016) and most recently with Hunter Drama, Chicago (2018) as Mary Sunshine. She has represented Australia twice at the Junior Theatre Festival with Hunter Drama, with workshop experiences in New York, Atlanta, Los Angeles and North Carolina. Specialising in musical theatre, I Hope It’s Not Raining in London will be Zoe’s first play – coming off a City of Newcastle Drama Association – CONDAs award winning run with High St Productions’ “The Drowsy Chaperone” in 2018.

Zoe could not be more excited to be in I Hope It’s Not Raining in London and can’t wait to bring the revised show to an even wider audience outside of Newcastle.

One Reply to “I Hope it’s Not Raining in London: TOUR”